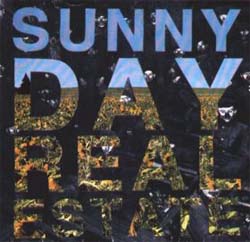 To bring Sunny Day Real Estate to the phone is now easier than it used to be.

Formed in 1992 at the height of the Seattle grunge wave, the introspective guitar-pop quartet took a different path to many American north-west acts at the time, refusing to conduct press interviews or even perform in California. It was a brave stance by a young bunch of idealistic high-school graduates who believed rock groups ought not be bought and sold.

"We had a lot of large ideas back then, the main one being 'let's not make being in a band and putting out music a commodity experience'," explains bassist Nate Mendel. "We wanted to have the music speak for itself and we felt we didn't need to market ourselves and our publish photos and do interviews to talk about the process of being in a band.

"But we didn't really understand at the time how doing all that would be interesting or relevant to people. We just wanted to be an enigma and go out there and play and see what happens. Some of that was us not knowing in our own hearts what we wanted out of a band and some of it was arrogance and some of it was kind of genius."

Their success forced Mendel to abandon his journalism studies but a year later it all came crashing down when singer Jeremy Enigk found God and quit.

"That wasn't compatible with being on tour with a rock band," muses Mendel. "But re-examining it, that wasn't what happened at all. I think it was a more traditional band break up scenario and had more to do with different people ready to make being in a band a full-time job and others not being so ready to take on that responsibility."

The group reunited briefly (without Mendel) in the late 90s, recording a couple of albums only to sever ties again in 2001. But in 2009 Sub Pop created a reformation catalyst by re-mastering and re-reissuing SDRE's first two albums, with bonus tracks.

"We did liner notes for those records and we realized that the history of the band didn't really have a chance to get written," says Mendel. "We were looking at each going 'what really happened back then?'."

Now re-assembled for the first time in 15 years, the original lineup is currently entertaining American and Canadian audiences with debut tours of Europe and Australia to follow. "All the characters in the band are kind of the same," laughs Mendel. "We've pretty much picked up from where we left off."

A new track has also crept in the live sets and a comeback album is slated for 2010.

"Our guitarist player Dan said something in an interview that I read and thought was great," says Mendel. "I'm para-phrasing but he said 'we've got a musical communication going now and it's been happening through the years and we pick it up and drop it off but it's always continuing, this conversation we have'. I mean the band is reforming now for the third time but it's really just a continuing conversation."